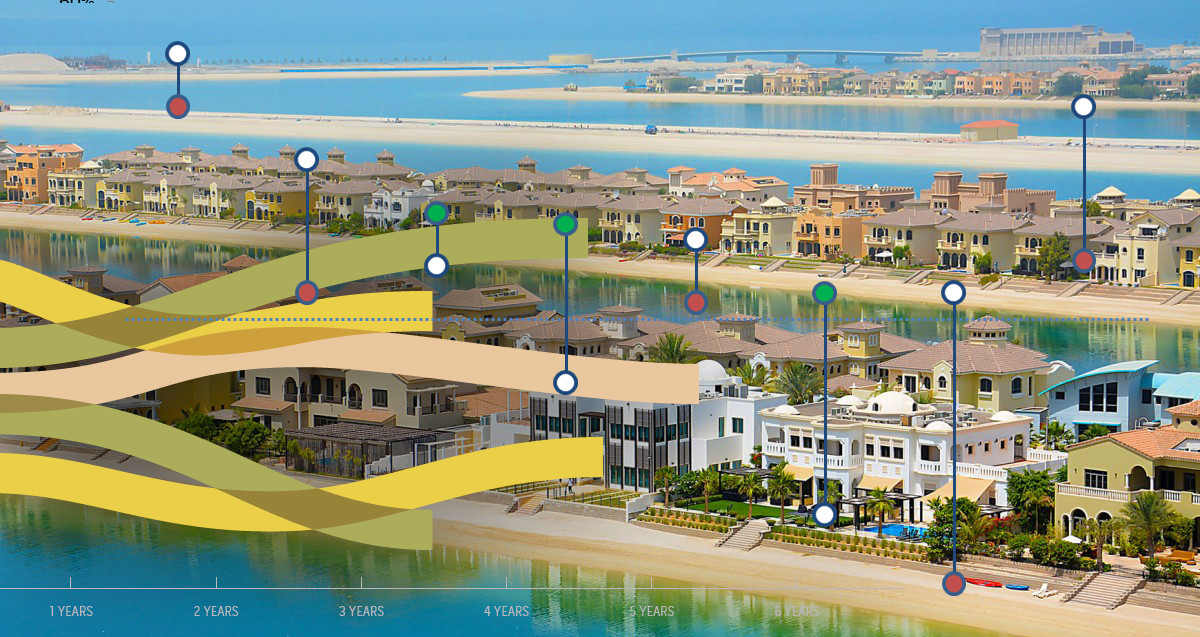 Dubai: Estate agents in Dubai seem to be in the grips of a bearish sentiment. A significant 46 per cent among their ranks feel that apartment values in Dubai could drop by up to 5 per cent in the first three months of the year, while another 5 per cent reckon the decline to be more than 5 per cent.

Thirty-three per cent, meanwhile, are keeping their fingers crossed that values would remain the same during the first three months, according to a poll conducted by the real estate consultancy Cavendish Maxwell. 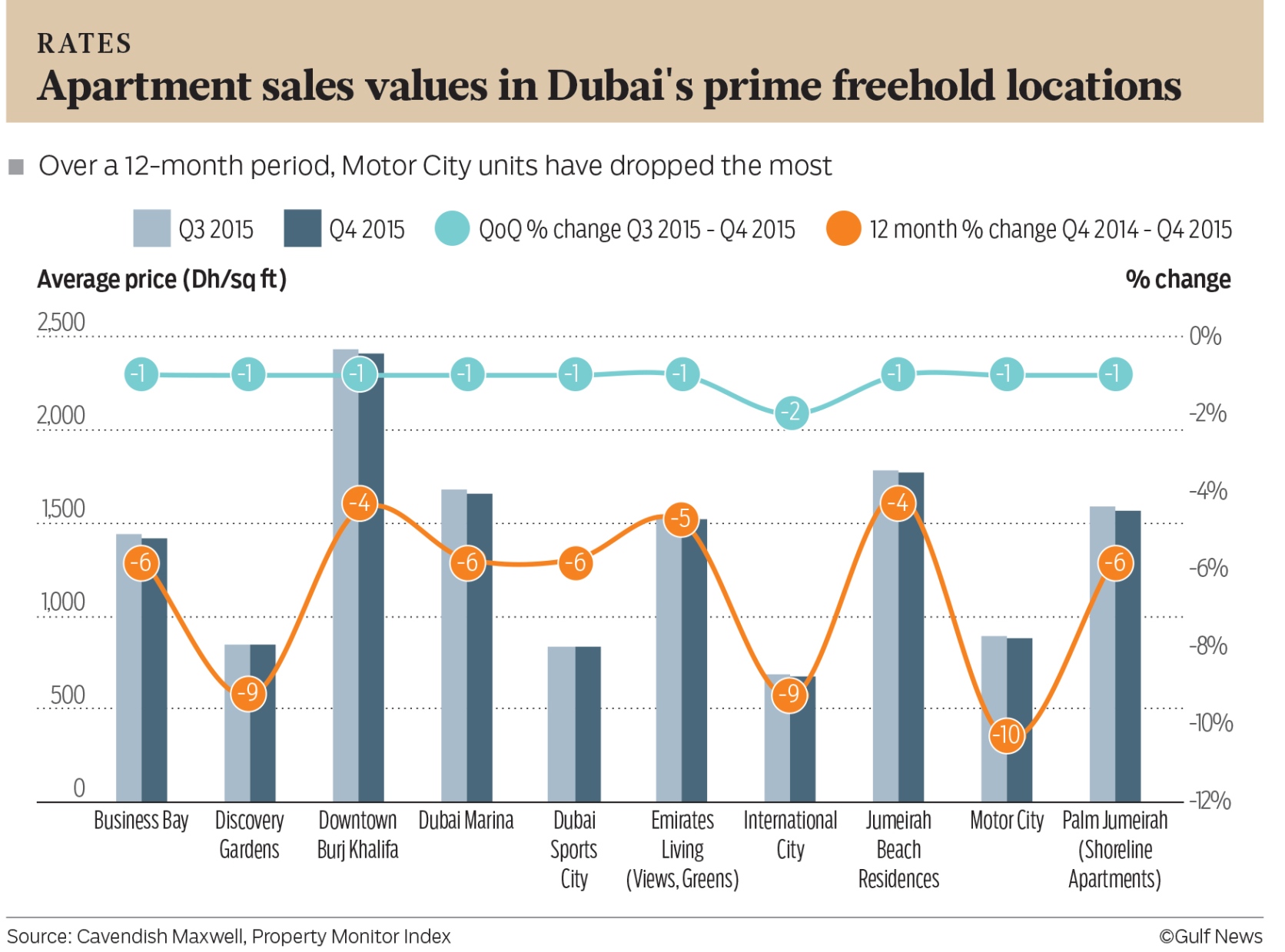 With villa prices, 34 per cent of agents suggest a less than 5 per cent softening during the period, with 9 per cent insisting it could be higher. Another 43 per cent believe the status quo at the end of the fourth quarter of 2015 will be maintained.

With estate agents giving off such negativity, prospective buyers will have a tough time deciding when is the right time to get back into buying. Should they do so now, as apartment values across Dubai have already experienced an average 6 per cent dip in the 12 months ending the fourth quarter of 2015? Or should they wait for the anticipated further drops?

With no clear-cut answers, it adds to the state of flux in the Dubai property market. Another factor relates to exactly how many new homes will be added to Dubai’s existing stock this year.

The ballpark figure suggests 30,000 units could be added this year — “which may be subject to potential delays”, according to Cavendish Maxwell. There are valid reasons for the scepticism — last year Dubai was supposed to absorb around 20,000 new homes. But the actual delivery came to around 8,800 units, with 70 per cent being apartments, according to Cavendish Maxwell. There is now a question mark over whether the delayed units will see handover this year.

For an investor looking to commit now, which are the locations that offer the best pricing options for entry?

Among existing freehold residential communities across Dubai, apartments in Discovery Gardens, International City and Motor City had the maximum drops by 9-10 per cent, based on Cavendish Maxwell estimates. This is for the 12 months from the fourth quarter of 2014.

The upscale high-rises at Dubai Marina, the Downtown, Business Bay and JBR had dips between 4-6 per cent during the same period, while the Shoreline Apartments on the Palm averaged a 6 per cent drop. When it comes to villas, values were down by 8 per cent on average over 12 months, with those at The Meadows and Springs lower by 12 per cent and 18 per cent. Among the emerging villa communities, units at Jumeirah Village Triangle were lower by 10 per cent.

Dubai developers halted delivery of about a quarter of the properties set for completion this year, bolstering apartment rents but failing to stop a 16 percent price decline, according to CBRE Group Inc.

About 6,000 nearly-completed homes sit empty in newer developments such as Dubailand, Jumeirah Village Circle and Dubai Sports City as some developers withhold keys from buyers, according to CBRE, which visits developments to assess the extent of construction on various projects.

Single-family home rents declined 4 percent compared with a 14 percent drop in values, Matthew Green, head of U.A.E. research at CBRE, said at a conference Monday. Apartment rents were unchanged. Rents climbed in lower-priced developments such as Sports City and Dubailand but fell in prime areas such as Palm Jumeirah and Dubai Marina, which had been quickest to recover from the city’s 2008 property crash.

Out of 20,000 homes CBRE estimated were ready for completion this year, 14,000 were brought to the market, Green said. The supply squeeze and growing leasing demand is maintaining a gap between rents and values. While some developers purposely delayed completion, some projects were held back by the approvals process or buyers who failed to make payments, CBRE said.

Up to 60 per cent of all the residents moving within Dubai so far this year have shifted into 10 localities, a new report has found. The study by portal MoveSouq.com examined data from more than 2500 moving requests captured on its website. The report, which measured the trends from January to September, found that areas like Jumeirah Lake Towers and Palm Jumeirah have seen a drop in popularity during the year.

Meanwhile, Dubailand generated a 14.6% increase in interest and climbed three positions to land in the 7th spot. Jumeirah Beach Residence retained its 8th spot and had 4.7% more search hits in September compared with August.

Dubai property prices fell by two percent in the third quarter of 2015 following a similar decline in the previous quarter, according to a new report by consultants Cavendish Maxwell. Its Dubai Residential Market Report said apartment and villa prices have both dropped by an average of two percent between July and September. Year on year, it said apartment prices have fallen by six percent and villas by nine percent. Cavendish Maxwell said that as overall apartment prices continue to drop in Dubai, the rate of decline in prime locations such as Business Bay, Downtown Burj Khalifa and Palm Jumeirah has decreased.

Orwell Huxley
A journalist and editor who has lived in Dubai for 20 years and on the Palm for the last 6. Having bought his own home on the island, he really feels it is home, loves it, and believes it could well become the best place on the planet.
You might also like
The Palm Insider
Nakheel Sets 28th November as Opening Day for Nakheel Mall
Holy Moley Batman, There’s a Giant Mall growing on the Palm
When is Someone Going to Tell Nakheel it is not Wanted?
Traffic Lights on the Palm – The Question is not if, but When Someone is Going to Die
Comments
Leave a response