Nakheel has awarded a contract worth Dh819 million for the construction of The Palm Tower, its 52-storey, five star hotel and residential complex on Dubai’s Palm Jumeirah.
by Orwell HuxleyOctober 4, 2015
Contents

Nakheel has awarded a contract worth Dh819 million for the construction of The Palm’s first tower, rather literally called The Palm Tower, a 52-storey, five star hotel and residential complex on the trunk of the Palm, overlooking the up and coming mall.

The developer has appointed UAE-based Trojan General Contracting and National Projects & Construction LLC to jointly build the landmark, which will stand almost 240 metres tall – not the largest structure in the emirate by any margin, but one that will dwarf anything else on the island.

The Palm Tower will comprise 504 luxury residences and a five star, 290-room hotel, including a rooftop infinity pool, restaurant and viewing deck.

The hotel will occupy the first 18 floors of the building. 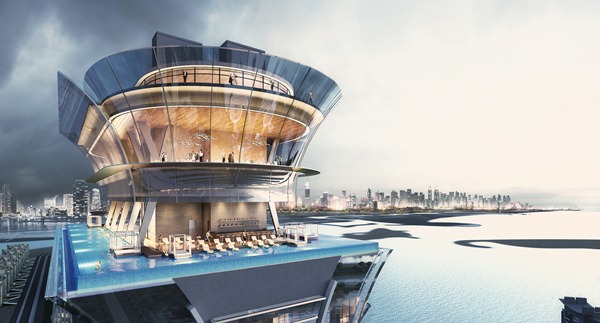 The Palm Tower residences, on sale with prices starting from Dh1.7 million, comprise fully-furnished studios and one, two and three-bedroom apartments.

Residents and guests at The Palm Tower will enjoy direct access to Nakheel Mall, which will have 300 shops, cinemas, a medical centre, a fitness centre and a roof terrace offering fine dining outlets.

The Palm Tower is one of 10 hotels being constructed by Nakheel as part of its expansion into the hospitality sector.  Others are located at Deira Islands, Ibn Battuta Mall and Dragon City.